We asked our colleagues for their preferred file editors - here are the results: 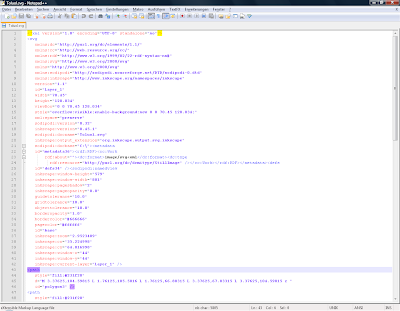 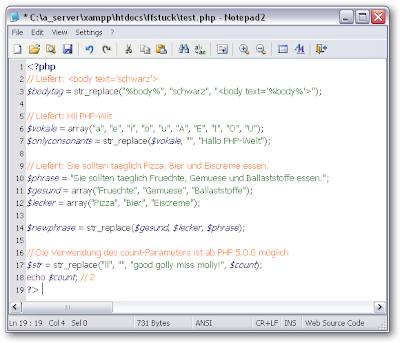 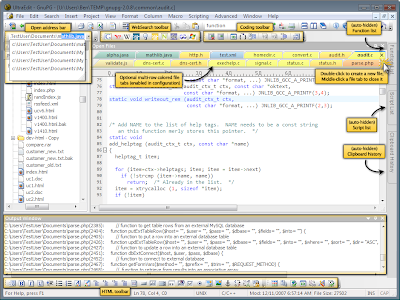 You can change the IE7 view source editor pretty easily to any of your favorite tools by hacking up the registry. Maybe you want to backup the Windows registry first. In regedit navigate to HKEY_LOCAL_MACHINE –> Software –> Microsoft –> Internet Explorer and create a new key named "View Source Code Editor". Below this key, create another one: "Editor Name". Double click the default value of the Editor Name in the right pane and enter your tool including the complete path:

One of the annoying things about Visual Studio default settings is the fact that the Solution Explorer does not track what files you are currently looking at. There is actually a setting in Visual Studio that does this automatically: Tools - Options - Projects and Solutions - Track Active Item in Solution Explorer. 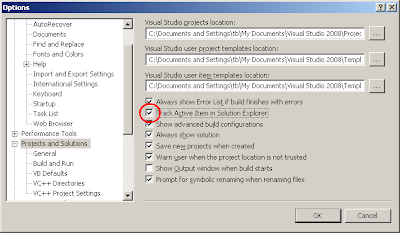 Are you new at ReSharper and want to get a quick overview about navigating your source code? Have a look at http://www.dimecasts.net/Casts/ByTag/ReSharper for a nice screencast.
Created by dodo on Friday, April 24, 2009 No comments:

With Skype 4+ you can not only create group conversations but also save them. Contacts - New Group displays a dialog where to create the group. After adding members click on the symbol on the top right in order to provide a name and store it. 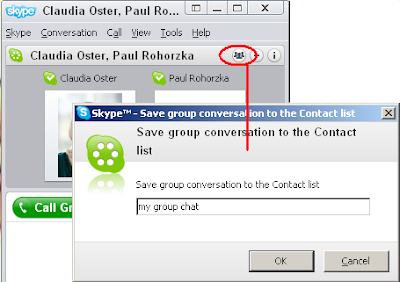 Now you have an entry "my group chat" in the contacts list and are able to see the history of this conversation.
Created by dodo on Friday, April 24, 2009 1 comment:

In Visual Studio and many other Windows applications you can use CTRL+DEL to delete the word to the right of the cursor. If you’re in the middle of a word, it only deletes the portion that’s to the right of your cursor.

At least in Visual Studio with SHIFT+DEL or CTRL-X the complete line can be deleted. The content is put to the clipboard. CTRL+D duplicates the current line. For cutting a line after the cursor there is no single shortcut: you have to press SHIFT+END for selecting the rest of the line. Then use DEL for deleting the selection.
Created by dodo on Friday, April 24, 2009 1 comment:

See our previous post http://devingdever.blogspot.com/2009/04/devtnt-2-ctrlenter-send-e-mail-in.html for delaying the delivery of emails.
Created by dodo on Friday, April 24, 2009 No comments:

The ReSharper coding styles can be exported and imported by ReSharper - Options - Common - Code Style Sharing - Import/Export. (Code inspection severities are said not to be supported by this feature yet.)
This will create a file next to the Solution called project.4.1.resharper. The file has to be added to the source control.

For details on sharing across the team with TFS see the posting from Michel Grootjans: http://geekswithblogs.net/alternativedotnet/archive/2008/10/20/125936.aspx
Created by dodo on Sunday, April 12, 2009 No comments:

The main purposes we collected and which are mentioned by Microsoft as well are:
Further reading: http://msdn.microsoft.com/en-us/library/zbhkx167(VS.80).aspx
Created by dodo on Sunday, April 12, 2009 No comments: 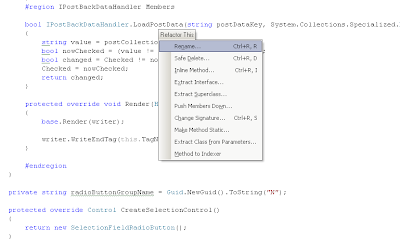 Unlocker application was designed to be a useful Windows Explorer extension allowing users with a simple right-click on a file or folder to easily get rid of error message such as error deleting file or folder, cannot delete folder.

It helps delete locked files with error messages like

If the folder or file is locked, a window listing of lockers will appear:

This freeware tool can be found at
http://www.softpedia.com/get/System/System-Miscellaneous/Unlocker.shtml

When sending an e-mail in Outlook, don’t bother clicking on that “Send” button — press Ctrl+Enter to send. You’ll need to confirm with a dialog box the first time. The Shortcut Alt-S also works.

Some people complain as they send a vital email by accident before it was ready. Maybe this can be solved by using some built-in features of outlook: You can delay the delivery of an individual e-mail message or you can use rules to delay the delivery of all messages by having them held in the Outbox for a specified time after you click Send. For further details see http://office.microsoft.com/en-us/outlook/HP012328171033.aspx
Created by dodo on Friday, April 10, 2009 No comments:

DevTnT 2 - How to switch Control and Capslock keys

The Caps Lock key on most PC keyboards is in the position where the Control key is on many other keyboards, and vice versa. This can make it difficult for programmers to use the "wrong" kind of keyboard. This posting shortly describes how to swap these two keys.

Alternatively you can manually manipulate the registry by adding the key "Scancode Map" under HKEY_LOCAL_MACHINE\System\CurrentControlSet\Control\Keyboard Layout and enter the hex codes mentioned above: 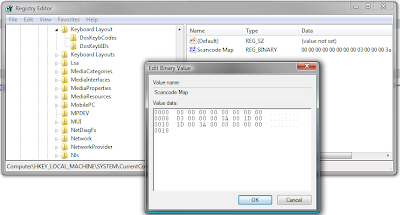 DevTnT 2 - Why is my harddisk full and wtf is WinDirStat?

WinDirStat (WDS) is adisk usage statistics viewer and cleanup tool for Windows. It shows disk, file and directory sizes in a treelist as well as graphically in a treemap. 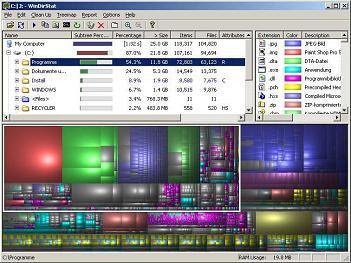 This open source tool can be downloaded for free under http://sourceforge.net/projects/windirstat/

There is something you do a lot in Visual Studio and there is no shortcut for it? Create one. You have to 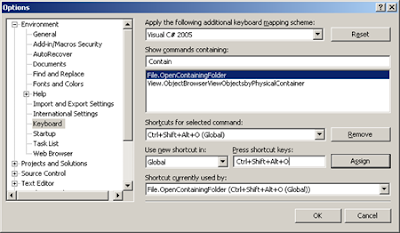 If you’re typing (in Word, Outlook, PowerPoint, and many other text entry programs) and you use the wrong word, a quick way to delete the entire word is Ctrl+Backspace. If you’re in the middle of a word, it only deletes the portion that’s to the left of your cursor.
Created by dodo on Friday, April 10, 2009 No comments:

There are two podcasts I am listening to on a more or less regular basis: Scott Hanselman's Hanselminutes and the StackOverflow Podcast with Joel Spolsky and Jeff Atwood.

Besides all the most of the time interesting stuff both of the podcasts circumvent, there has been an interesting mixup between those podcasts (see detailed chronology below).

It all started when Scott Hanselman had a talk with Robert C. Martin (aka "Uncle Bob") about the SOLID principles in Hanselminute Show #145.

Two weeks later, Joel Spolsky refered to that Hanselminute episode including some personally offending comments towards Mr. Martin (StackOverflow Podcast episode 38). In short, he said something similiar to "I have the feeling that people that state such principles cannot have written much code.". Hard stuff.

After that episode the forum for the StackOverflow Podcasts were flooded with comments regarding principles in software engineering in common and specially the SOLID principles.
That wind in the community brought Jeff and Joel to invite Mr. Martin for a follow up episode of their StackOverflow Podcast. In Episode #41 Mr. Martin and the hosts had a rather friendly talk about the arguments pro and con principles, TDD (test driven development) and other software related topics.
Concluding that series, Scott Hanselman again had a talk to Mr. Martin in Hanselminute Show #145 where they resumed about the discussions of the weeks passed.

I can recommend listening to those podcasts on that topic since four guys, each with a strong opinion about their profession, discuss topics of the software engineering.

Remark: The citations are copy pasted from the respective podcast's websites.

Joel and Jeff discuss YSlow optimizations for large websites, the value of unit testing, and the hidden pitfalls of asking questions to programmers.

If you want to go directly to the topic, you can skip the first 45 minutes.
Listening to that podcast, one gets the feeling that Spolsky intentionally is misinterpreting the SOLID principles as discussed in Hanselminute #145. The examples he gives are definitely not what Mr. Martin meant it to be and are really horrible. Listen yourself!

The Friendly Discussion (After Apology)

Joel and Jeff sit down with Robert Martin aka "Uncle Bob", and discuss software quality, the value of software engineering principles, and test-driven development.

Uncle Bob Martin responds to the hullabaloo around the SOLID principles from Show 145, his time on the Jeff Atwood and Joel Spolsky StackOverflow podcast, and offers his reasoned response. Is it time for a Software Apprenticeship Program? Other possible titles for this show: "He's back and he's pissed." "Bob's your Uncle." "Joel Who?" "SOLID State" "I got your tests right here!" "Smack Overflow" "Pay Attention This Time: Bob Martin on SOLID" (No, Bob's not pissed. We're just having a laugh.)