Double-clicking a file in the Pending Changes Window opens it. Holding SHIFT pressend when double-clicking does a diff with the current Source Control Version of the file.

This may apply to other windows (e.g. View History) as well, but unfortunately in the Solution Explorer it does not.

Sometimes our exception handling code makes no use of the exception object that has been thrown. Therefore we do not need to declare a variable to reference it (i.e. the traditional “ex”). However this leads to an issue while debugging. Without a variable there is nothing to mouse over in order to display the exception’s contents once the initial popup has been dismissed.

Instead of doing this you can add the special variable $exception to the debugger’s Watch Window, or query it via the Immediate Window. This variable references the currently thrown exception when located within a catch block.

In many applications you do some exception handling which implies catching exceptions and displaying the error to the user in a proper way or just log it into a file oder database. During the debugging process you might want to jump to the code where the exception was originally thrown (“first chance exception”).

Using Visual Studio .NET, you can configure how the debugger handles first chance exceptions on a per exception basis or for exception families (by namespace and/or runtime). Select Debug – Exceptions (or use CTRL+ALT+E) and now you can enable “Thrown”-checkboxes for exception types you want the debugger to stop immediately.

Note: The same effect for a single exception can be reached by using the System.Diagnostics.Debugger.Break() method.

To keep the Output Window (Debug - Windows – Output) “cleaner”, you can prevent message types from being displayed. Of course they can be turned on again. When right clicking into the window six kinds of messages are to be configured:

Incremental search can also be thought of as live search. The cursor highlights the first finding as you're typing the search term.

Warning: It does not search within collapsed regions (no matter if explicit or implicit regions).

Searching backwards starting by the cursor position can be done by pressing CTRL+SHIFT+I.

For quickly finding files in Visual Studio you can use SHIFT+CTRL+N. A small dialog pops up where you can enter a pattern (including * as a placeholder) for the file name. Below the list of all matching files in the solution is displayed immediately.

KeyJedi is a nice tool that makes keyboard shortcuts visible as you use them. The tool also works if you are remotely connected to a different machine.

But be careful if you hold a presentation and enter your password somewhere ;-).

See the blog of Roy Osherove to find out more about his tool: http://weblogs.asp.net/rosherove/archive/2007/05/29/key-jedi-1-03-renamed-from-shortwatcher.aspx

Web Service Studio is a free tool to invoke Web Methods interactively. The user can provide a WSDL endpoint. By clicking the button “Get” the tool fetches the WSDL, generates .NET proxy from the WSDL and displays the list of methods available. The user can choose any method and provide the required input parameters. On clicking Invoke the SOAP request is sent to the server and the response is parsed to display the return value.

On the second tab “Request/Response” you can specify an XML message to send to the Web Service. On the third tab “WSDLs & Proxy” you can investigate the proxy code that was autogenerated from the XSD. There is an option to save it into a file.

The tool is very useful for testing your Web Services easily without writing client code. In one of our customer projects we call the Web Services directly for executing some seldom maintainance operations.

Similar functionality for WSDL or REST based Web Services offers the free and open source desktop application soapUI. It provides

It can be found at http://www.soapui.org/.

Windows Communication Foundation (WCF) Test Client (WcfTestClient.exe) is a GUI tool that enables users to input test parameters, submit that input to the service, and view the response that the service sends back. It provides a seamless service testing experience when combined with WCF Service Host.

One might think that using a non-classic theme under windows XP or higher is just a matter of the look of windows. I thought so for myself until I found a real cool feature just by accident and investigated it a little bit.

Kind Of A PITA: Switching To The Host From Within A Full Screen Virtual Machine

You might know the following situation: You are running a virtual machine in full screen mode because it is your current main occupation. But once in a while you have to switch back to the physical host machine to read your mail or alike.

So, how can you do that?

Correctly. Hopefully you can remember what you host key settings are (I like using the scroll-lock-key because I do not use it for the function it's originally intended), hold it down while hitting the return key. So, the virtual machine window restores and you're back where you wanted to.
Then, when you're done with the tasks on the host machine, you will bring the window running the virtual machine back on top and again maximize it using the host-key together with return.
If you have to do this every twenty minutes or so that can be really unsatisfactory.

But, there may be some light for you at the end of the tunnel.

As the following screenshot proofes, you can bring up windows from the host machine while still running the virtual machine in full screen mode (here a Windows XP in a virtual machine booting on 640x480 fullscreen hosted on Vista machine): 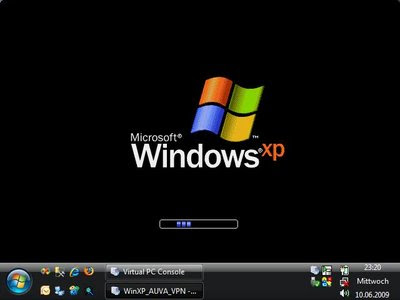 How did that come about?

When restlessy moving around with my mouse I could not see the arrow because I just had a windows in an early stage of the boot process in front of me. But, some times a big arrow flashed up, namely when I hit the left or right top corner of the window. Although I'm not a gamer, I know: "when there's a mouse cursor, I can click.". And so I did.
Meanwhile the desktop of my virtual machine showed up and I tried the task switch (Alt-Tab). And, astonishing, the Vista task switch came up (including the desktop-icon)! So I learned, that even from within the full-screened virtual machine I can put the focus back to host machine by clicking one of the top corners.

Investigating the screen shot of the full screen uncovered the round corners of the not really full screen: 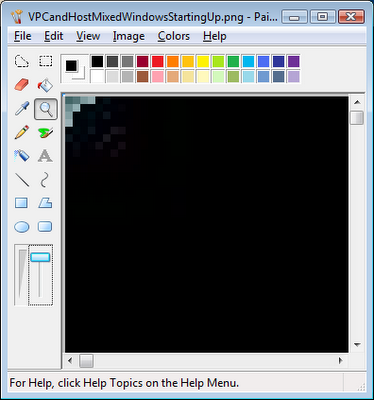 And yes - it is about the rounded corners of the desktop theme I used with Vista. A temporary switch back to classic mode proofed that the feature (is that by design?) disappeared.


Here's another evidence, the Vista taskbar and a system dialog in front of the full screened XP in the virtual machine: 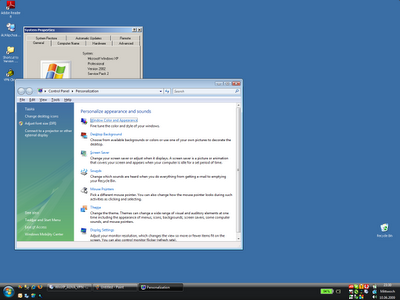 Also with this screenshot the rounded corner's show up (but one has to look carefully with my notebooks native resolution): 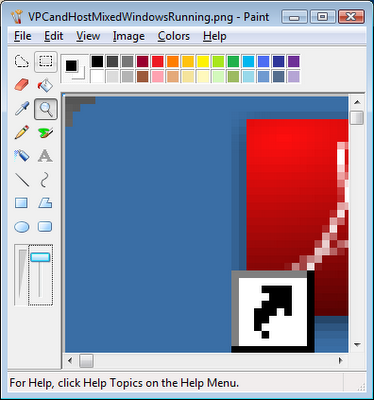 By clicking on the top left or top right corner you just click through your virtual machine onto any window of the host system lying behind it. So, especially with the top right corner be careful not to accidentally close some window you might need. :)
Created by Paul Rohorzka on Wednesday, June 10, 2009 No comments:

CTRL+W is a very helpful ReSharper shortcut for refactoring. Based on the current cursor position it marks the current word, sentence, sentence + apostrophe, the parameter, all parameters, statement, line, block, method, class, and so on. This shortcut is very useful when it comes to extract the string literals from your source.
Created by sebuseba on Friday, June 05, 2009 1 comment:

With this windows shortcut you can make a screenshot from the current focused window. This is very useful when it comes to document a specific part/window of your application and you just want to have a screenshot of the specific one. With the help of this shortcut you don't have to crop the screenshot anymore.

Since the user interface of blogger.com sucks when it comes to editing larger posts, I looked around for blogging clients (thanks Marcus for the hint).

To let you get an idea of what I mean with "sucks", just look at the preview of this screenshot (no really new information from the full sized version): 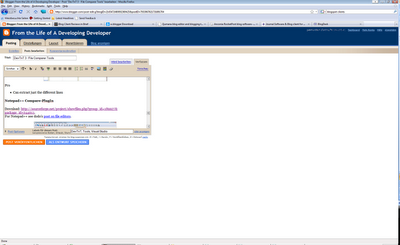 I hate applications and sites where the working area is restricted to some extent when I have a 22+ inch monitor in front of me. I want to control the size of my windows and not be restricted by the application! IMHO this is a perfect fail for usability for any application (and there are so many of them out there!). In other words: *grrr*

A second thing that makes editing posts painful with Blogger's Web-UI is working with images. Although there is a nice and functional dialog for inserting (and uploading) pictures from you local harddrive, the problem is that all new pictures are inserted on top of the post. This happens regardless of the current cursor-position or selection. Moreover, it is not possible to move the picture around with drag-and-drop in the editing pane, one has to use cut and paste to shift the picture to the desired position.

Just in case you're also looking for a free alternative to Blogger's Web-UI, I wrote this post not with one of the tools described below. :(

After some googeling I downloaded two freeware editors to test - Qumana (http://www.qumana.com) and w.bloggar (http://www.wbloggar.com). 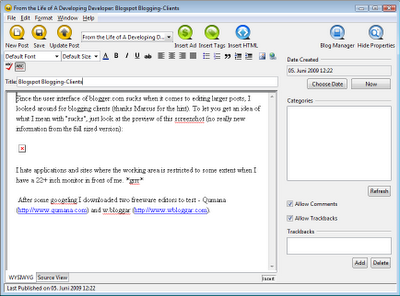 Negatives:
Conclusion
Because of the many problems with central areas of blogging, Qumana is not really an option for me.

Negatives:
Conclusion
Due to the missing of basic features, I have no animo left to use this tool.

Both tools tested lack of basic features, so I'll contritely stick on Blogger's Web-UI. It's not that bad, as I thought! :)

Do -->you<-- know a better alternative for blogging on Blogger?
Created by Paul Rohorzka on Friday, June 05, 2009 No comments: